A few days ago, I finally got around to using a botanical and a clay as colorants for my soap! I also experimented with the fluid hot process soap method.


This post contains affiliate links and as an Amazon Associate I earn from qualifying purchases. 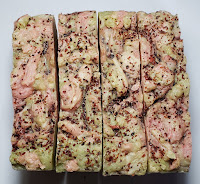 In this soap, I made my normal soap recipe using the hot process soap method. I left half of the soap without colorant.

The other half I split and used spinach powder and rose kaolin clay as colorants. I used 1 tsp./lb dispersed in carrier oil, then another tsp. because it didn't dark enough.

I was hesitant to add any more since I didn't know how it would turn out. Then I did a hanger swirl and topped with ground rosehips. Now that I know it dries lighter, I think I will try and go darker in the next batch. 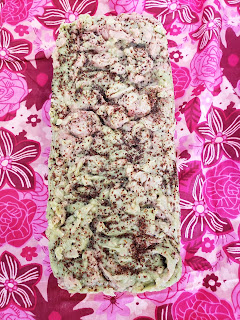 Most fluid hot process recipes include an ingredient called sodium lactate and yogurt to make the soap pourable.

But I would prefer not use sodium lactate due it's chemical sounding name. And I omitted yogurt because it's not vegan friendly. I could probably try plant-based yogurt but generally they are more expensive. So I left both out and I replaced with coconut milk and agave nectar. 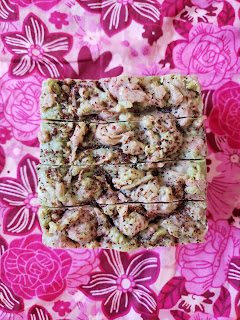 I decided to use the recipe from Lovin Soap Studio as a guide. I used my normal recipe and incorporated the following suggestions:  adding sugar (agave syrup), maybe extra water, using plastic wrap on the lid and minimal to no stirring during the cook. 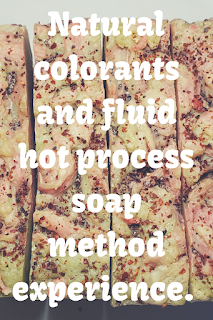 While I am pleased with the results, the soap has a caramel color, which is from adding the milk and sugar while the soap was too hot. I prefer a creamy white soap so that the colors are more distinct.

Next time, I will eliminate the milk and sugar and just use extra water. When I mixed the colorants with water and added to the soap, I noticed the soap got more fluid. 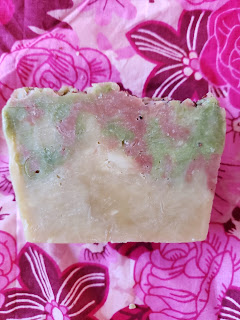 I chose to name this soap, Happy Soul, because the scent blend makes me feel happy in my soul. It's an earthy, unisex blend of patchouli, cinnamon, lemongrass and lavender. You're gonna love it!
handmade soap hot process soap making Rose kaolin clay spinach powder

My rant about the term Pure African Shea Butter

My mom told a woman that I offer shea butter and she subsequently asked me, "Where do you get YOUR shea butter from?" I responded confidently, "l order it online." She replied, smugly, "Oh! My friend gets THEIRS from AFRICA." Like that makes it more special. She proceeded to describe to me this seemingly huge amount (probably around 2lbs.) that she gets for $10! Hard for me to believe, but ok. I tried to get over it but the more I think about it the more I become concerned that people are saying their shea butter is from Africa just as a selling point. It's all from Africa! I believe that it is redundant to say 'african shea butter' since the karite tree that it comes from is indigenous to Africa. And to my knowledge there is no where else to get it. Furthermore, they say it's from Africa as if they know the person that got off the plane with it. Or their family lives there, harvests and ships it to them directly. If that's true I& 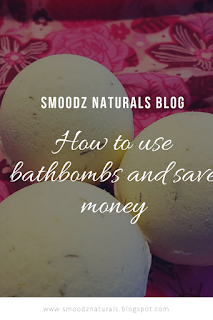 How to use bath bombs?

So you've gotten your colorful, scented, fizzy bath treat and you're ready for a relaxing, spa-like experience. You've run your bath water and toss it in and as it bubbles you can't help but think of the dollars you just tossed down the drain. But don't fret, I have some tips to help your budget while you pamper yourself. First, did you know you could break apart your bath bombs and use one half in a bath and still have an excellent spa bath?  Yes, take a butterknife and split along the seam of the bomb use one half and place the other half in a dry storage bag and store it in dry place until you are ready to use it. See How to split and store your bath bombs . Second, if you catch a bargain and buy in bulk. When you buy in bulk, the cost of each individual treat goes down.  So, when stored properly, your can extend the time between restocking. Finally, get you treats from Smoodz! I make quality handmade, natural bathbombs at an affordable price. I